Brew Crew For You


In 1978 the Brew Crew finally arrived and lifted themselves out of "Expansion Team" status.  With pitching guru George Bamberger at the helm the team's normally poor pitching was elevated to average status.  For most teams that would mean an average finish, but not for a team with a lineup as potent as Milwaukee's.  Top to bottom the Brewers had the most consistent lineup in the AL.  They led the league in runs scored and homers.  The core group was all under 30, except for veterans Sal Bando and Larry Hisle.  Bando, an Oakland A's castoff, provided a sound glove at third and smart veteran leadership.  Hisle hit .290 with 34 homers and 115 RBI's.  Centerfielder Gorman Thomas might have only hit .246, but he smashed 32 round trippers.  Smooth fielding first baseman Cecil Cooper hit .312 and scooped up a lot of errant throws from rookie sensation Paul Molitor, who was not really your prototypical second baseman.  The true star in the making was 22 year old veteran shortstop Robin Yount, who by 1978 was in his 5th major league campaign.  Yankee killer Mike Caldwell (22-9, 2.36) finished second in the Cy Young balloting.  At the age of 29 this crafty lefty finally came into his own.  On most normal years his effort would have been enough to win, but in 1978 Ron Guidry posted a season for the ages.  Funny how things work out like that.  22 year old Lary Sorensen (18-12, 3.21) looked to be one of the best #2 starters in the league.  A pair of 25 year old lefties, Jerry Augustine and Bill Travers won 13 and 12 games respectively.  Milwaukee's Achilles heel was their bullpen by committee.  The righty half of their lefty/righty closer combo, Bill Castro was lights out (5-4, 1.81, 8sv), but his lefty counterpart Bob McClure (2-6, 3.74, 9sv) was shaky at best.  Setup men Eduardo Rodriguez (5-5, 3.93) and Randy Stein (3-2, 5.33) will force the starters to hang on way past the point of fatigue.

In any case the Brewers were on the upswing, and fast.  Still 93-69 was good enough to finish in 3rd place in the strong AL East, 6 1/2 games behind the Bronx Bombers. 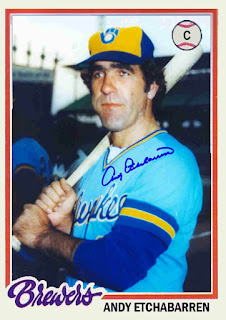 Purchased from the Angels in the offseason "Etch" was brought in to help share the catching duties with Buck Martinez and Charlie Moore.  Injuries and old age limited the former 2 time All-Star to just 4 games and 6 at bats.  After almost 950 games behind the plate it was time for him to call it quits and hang up the "tools of ignorance".  Thank the elves (Chad & Erik) for finding this rare photo of "Etch" in a Brewers uniform.  Looks to me like it was taken in Comiskey. 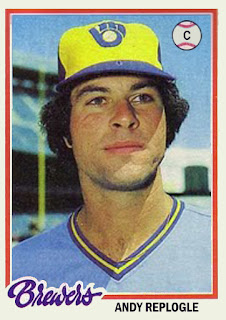 Error alert...Error alert.  For some reason I made Andy's position a "C" instead of a "P".  I promise to fix this in the final release.  Certainly not beyond Topps to make a mistake like this :)  In 18 starts this 24 year old righthander was 9-5, 3.92.  Pretty darn good for a guy who was a sub .500 pitcher in the minors.  The Brewers hoped that they had themselves a diamond in the rough, but unfortunately like so many false diamonds, under the pressure of a big league season his career turned to coal.  Replogle was farmed out after a miserable start in '79 and never returned to the biggs. 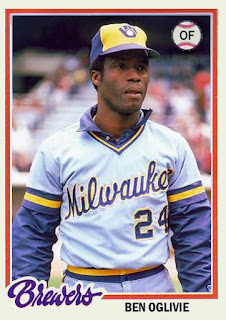 On December 9, 1977: Traded by the Detroit Tigers to the Milwaukee Brewers for Rich Folkers and Jim Slaton.  Oglivie bounced around in Boston and in Detroit for 8 seasons, but never really had any traction.  After hitting 21 homers and batting .262 for the Tigers in 1977 he was dealt to the Brew Crew, probably because the Tigers thought that he had peaked and they wanted to get rid of him at a point where they could get the most value.  Oglive made the Tigers pay for their mistake with 9 All-Star caliber seasons in Milwaukee, which included 1980 where he led the league with 41 homers.  In 128 games in 1978 he hit .303 with 18 homers and 72 RBI's.  Milwaukee found themselves their left fielder for the next 8 seasons.  I found this great photo on a Brewer fan web site. 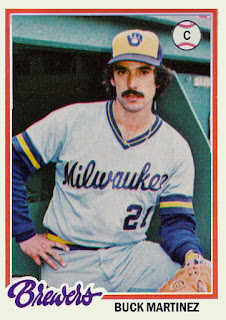 Known to most young people today as one of ESPN's lead baseball analysts, Buck was a career backup catcher who spent 17 seasons in the majors and hit just .217.  Buck must have talked till he was blue in the face during all that extended time hanging out with the pitchers in the bullpen.  Those "rap" sessions helped prepare him for his more lucrative second career on TV.  In 1978 Buck caught 89 games and hit .219, which was right on par with his career numbers.  He would spend 3 seasons in Milwaukee before moving on to Toronto. 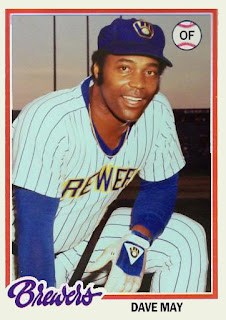 During Milwaukee's first 5 seasons in the AL May was their offensive star.  In 1973 he hit .303 with 25 homers and finished 8th in the MVP poling.  That turned out to be his career year.  His numbers declined the following season and he wound up in Atlanta, which was the NL's 1970's version of Cleveland.  After bouncing to Texas for one season he wound up back in Milwaukee for what was supposed to be the 34 year old's last hurrah.  In 39 games he hit a poultry .195 and had his contract sold to Pittsburgh in August, where he appeared in just 5 games and did nothing.  Philly would pick him up in the off season, but he would not make their major league roster out of Spring Training. I found this great photo on ebay. 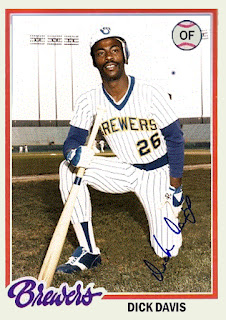 For 4 seasons, starting in 1977, Davis was the Brewers starting DH.  When a 23 year old becomes relegated to being a DH one can easily surmise that his glove was not gold, but lead.  Davis was a solid professional hitter, but did not have the true power that is expected of a DH.  In 1978 he hit .248 with 5 homers, which look more like the numbers of a middle infielder of the era.  In 1981 he moved over to Philly where he hit .333 in just 45 games, because his glove was too dangerous to have roaming the outfield.  A stint in Toronto and then Pittsburgh ended with little fanfare and he was out of baseball after the '82 season.  I found this photo while doing a Google search. 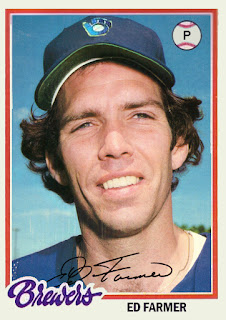 Farmer had arm and control problems and even tinkered with the idea of becoming a middle infielder before he wound up with the Brewers in 1978.  Milwaukee was his 5th club in 6 years.  He pitched in just 3 games and went 1-0 with a 0.82 ERA.  He would eventually hit his stride as a closer for the Chisox in the early 80's.  No known photos could be found from his short stay in Milwaukee, so I did some airbrushing on this photo taken while he was with Chicago. 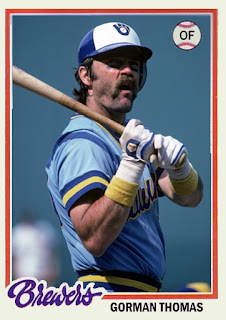 Stormin' Gorman Thomas was the Seattle Pilots #1 overall pick in 1969.  In fact he was the Pilots only #1 pick ever, because the franchise moved to Milwaukee after just one season.  In the early days Thomas bounced back and forth between the minors and the majors, which is why he didn't even net a Topps card in '78.  This would turn out to be his breakout season as Thomas would start in Centerfield for the Brew Crew for the next 6 seasons.  He would terrorize AL pitching with his long ball strength.  He would also strike out a ton, which made him a much watch when he batted.  I found this photo while searching Google. 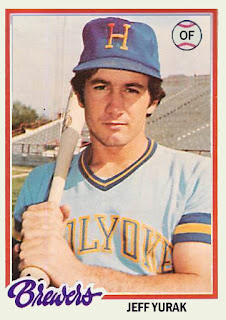 Jeff Yurak's full MLB career consisted of a 0-5 in 5 games with the Brewers.  A career minor leaguer who spent the lion share of his career in Double A.  Pictured is his AA minor league card photo, which I thought was appropriate for a guy who didn't even have a full cup of coffee in the majors. 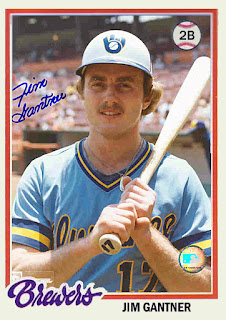 Gantner was a rookie second baseman who had this Molitor guy ahead of him.  Once the Brewers settled on Molitor at 3rd or DH Gantner became their regular second base man for the next 13 seasons.  Ganter, one of the most underrated players ever finished his career with a .277 average over 17 seasons, all in Milwaukee.  He was the model of consistency.  He was sneaky fast and stole almost 180 bases.  He hit .216 in 97 AB's in '78 as a 25 year old without a full time position.  It was the last time he would ever hit that low.  I found this autographed photo on ebay.  It was actually the first card I made for the 1978 set. 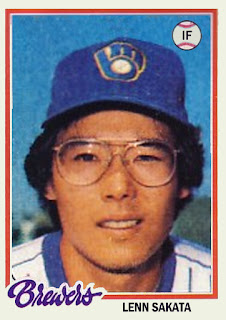 The good news is that Sakata's average went up 30 points from the previous season.  The bad news is that he hit just .192 and played sparingly.  In the three cups of Joe that he had in Milwaukee Sakata didn't see much action, so he was traded for basically no one and sent packing to Baltimore, where he carved out a nice career as a utility man.  Photos of him in a Brewer uniform are scarce.  I used his rookie panel card photo from 1980. 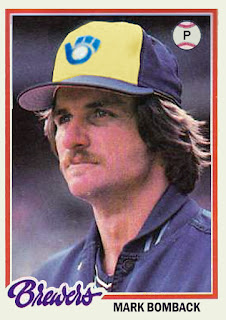 Bomback would get into just 2 games for the Brew crew in '78.  He was shelled in his one start, which is why he sports a 16.20 ERA over 1 2/3 innings of work.  A 25th round selection of the Red Sox, he wound up being drafted by the Brewers out of the Boston chain. He had a solid 10 win season for the Mets in 1980 after being traded to Flushing for Dwight Bernard.  The Mets didn't think he was all that good, so they dumped him on Toronto, where he posted 2 sub par seasons and was done with baseball.  I airbrushed in the Brewer yellow on the Blue Jays white cap, then put the logo on top of it. 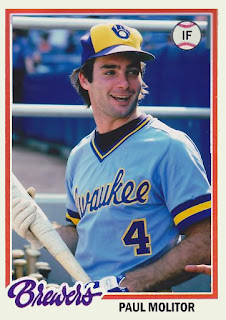 Topps saw fit to give Molitor a lousy BHNH panel rookie card.  How were they to know that he would turn into a HOF'er with over 3,000 hits.  In '78 he hit .273 and came in 2nd in the ROY voting.  I used a great young photo of him that I found on the web for this rookie card that was never to be. 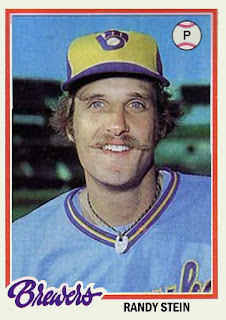 The Brewers gave Stein every chance to be good, but he just wasn't.  His 3-2, 5.33 record in 1978 was indicative of just how good he was going to get.  He was dealt to Seattle and produced a similar season in 1979.  Off to Chicago he went and again he performed terribly.  In total he would spend 10 season in Triple A and would fall into that category of AAAA players. 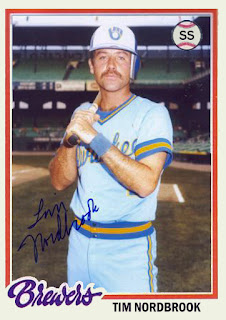 Toronto traded Nordbrook to the Brewers for Tim Johnson in April.  Neither team made out well in the deal.  In 2 season he went 1 for 7 for the Brewers.  Nordbrook bounced around 5 organizations in 6 seasons and then hit the minors when he couldn't catch on with the big club in Milwaukee.  He finished his minor league career as a .238 hitter, which makes it amazing that he lasted so long.  The elves sent me this rare autographed photo of him in a Brewer uni. 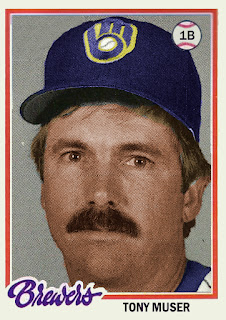 1st baseman who hit .133 with zero power do not last long in the majors.  Muser had just that type of season in Milwaukee in '78 and was never heard from again.  He did enjoy some solid years in a White Sox uniform prior to arriving in Milwaukee.  This B&W photo was easy to colorize and was taken from a 25th anniversary card set issued by the Brewers. 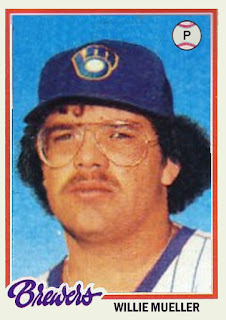