Things looked good for KC, because Yankee ace Ron Guidry had to pitch in that little playoff game up in Fenway, and would not be ready until Game 4 of the ALCS.  After splitting the first 2 games in KC with lopsided wins, the series moved to the Bronx.

George Brett went off an hit 3 homers, all off Catfish Hunter in what looked like a sure fire win by the Royals.  In the top of the 8th Darrell Porter singled home Amos Otis to tie the game at 4-4.  Porter would score 3 batters later when Goose Gossage got Al Cowens to ground out.  Heading into the bottom of the inning Herzog allowed starter Paul Splittorff to begin inning.  After Roy White's 1 out single Herzog went to the pen.  Instead of bringing in the lefty (Hrabosky), he went with the righty (Doug Bird), who served up a 2 run shot to Yankee captain Thurman Munson, which put New York back on top by 1.  Gossage took the mound in the top of the 9th and set the Royals down in order to give New York a 2-1 series lead.

The following night Ron Guidry outdueled Dennis Leonard to clinch the AL Pennant.  Guidry scattered 7 Royal hits over 8 innings, while striking out 7 and allowing just 1 run to cross the plate.  KC's 1 run would come in the top of the first.  Their failure to score more that inning was their downfall.  Leonard, who gave up just 2 runs, was victimized by 2 long balls (Nettles in the 2nd & White in the 6th).  With Guidry mowing them down the Yankees looked like a lock until the top of the 9th when Otis led off with a double.  Yankee manager Bob Lemon realized that his ace had gone as far as he could go, went to the pen for flamethrower Goose Gossage.  Pinch hitter Clint Hurdle went down swinging and Porter made the second out by flying out to center.  Herzog dug deep into his bag of tricks and pinch hit one more time.  Lefty Pete LaCock was immediately in a 0-2 hole as Gossage was not playing around.  on the 3rd pitch he lifted a weak fly to left that fell neatly into defensive replacement Gary Thomasson's glove for the pennant clincher.  For the 3rd time in successive years the Royals came up short vs the Bronx Bombers.  Power once again outdid speed.

Topps only issued 1 card for the ALCS.  In years past they would issue a card per game played in B&W.  I decided as part of this project that I would add these "missing" LCS cards. 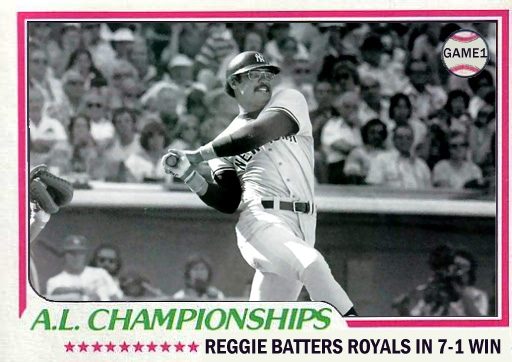 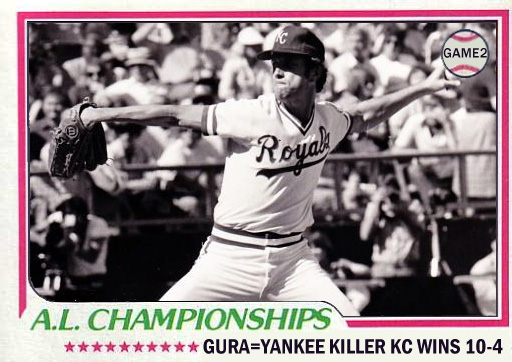 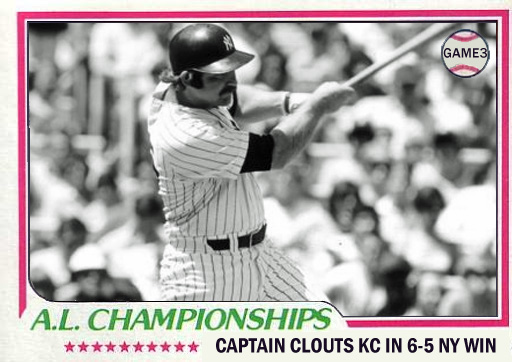 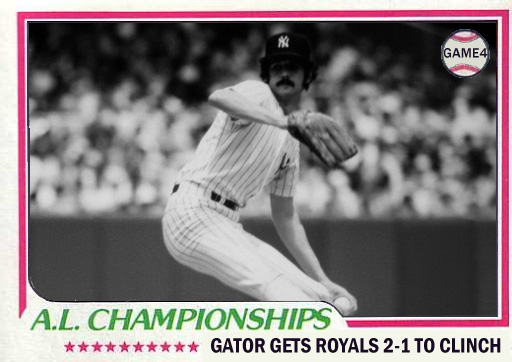